Code display thanks to the support of Grimorio Games

Come out of your grave

The Sword of the Necromancer is a dungeon crawling out of the ground with rogue elements. It’s clearly inspired by games like Enter Gungeon and top-down Zelda games. But what is the difference between this title and the masses, you ask? Its unique asset is the ability to resurrect enemies and have them fight alongside you as you do your best to conquer the dungeons, race after race. Interesting game mechanics, but is it enough to draw attention to the genre that has grown rapidly in recent years?

There is a great scenario in the game. 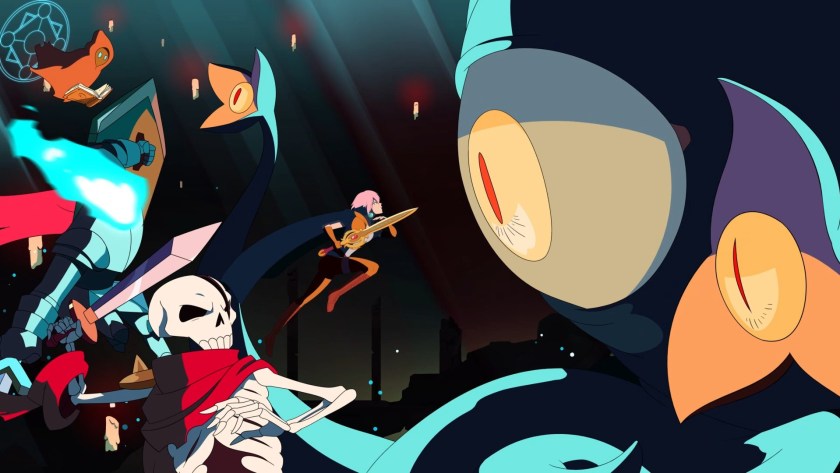 You play the role of Tama and you are on your way to save your beloved Coco who is dead. When you enter your first dungeon, you’ll find the Necromancer’s Sword, which serves as a tutorial to familiarize you with the game’s controls and mechanics. After that, you soon find out that the sword isn’t enough to bring humans back to life, so of course you have to go through several dungeons, each with a leader fight, to finally find a solution.

I loved the opening animation of the game and the epic soundtrack when you load the game. It’s well done and allows you to dive into dungeons and kill beasts. But I didn’t really like the plot elements of the game. Once you complete the floor, the game stops briefly to play a cutscene that gives even more depth to Tama and Coco’s relationship and shows how Coco is inevitably exposed to her fate. It is presented in the form of pictures with text and a reasonably good voice-over. The story is beautiful and I’m sure people will be interested. The problem is that these moments last too long. After beating a tricky final boss you’re all psyched up and ready to jump to a new floor, but a long pause for history spoils the rhythm.

Come out of the graves of your enemies and fight for me. 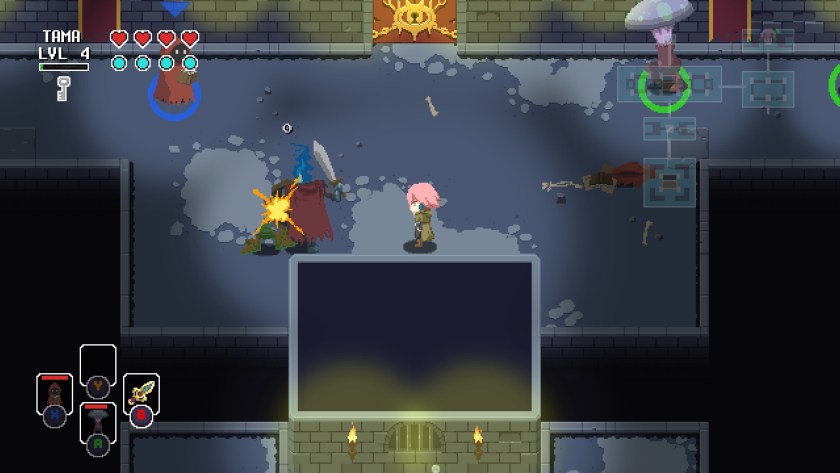 The gameplay seems pretty familiar in the roguelike genre. You enter a dungeon with several rooms to explore and creepers to take out. There are lots of chests to find and a big final boss to defeat, which you’ll probably have to try a few times until you get the hang of the pattern.

You have 4 equipment slots, one of which is always occupied by your sword. Other slots can house other items, such as weapons, spells and amulets. Standing over the corpse of a dead enemy, you can revive him to occupy an object location and summon him at will to fight for you later. It quickly becomes a juggling act as to what to wear. You may have three monsters, but you may not use the items found in the vaults. You also can’t save items to use later, unless you accidentally find a special glowing chest in a dungeon or defeat a final boss. For example, if you replace a material, you will lose all previously equipped materials in this lock. 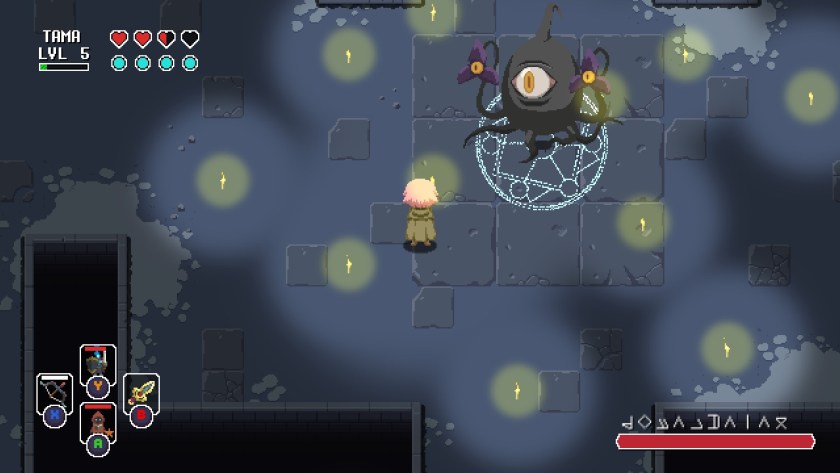 The controls are easy to learn. The game mainly consists of chopping swords and sprinting with the shoulder buttons. You have a blue stamina bar that depletes when you use your haste or spells, it recovers over time, but you can’t rely on it too much. The struggle is simple, but unsatisfying. This looks a lot like a stop-start. You can hit an enemy or a boss that takes a few hits, then rush to recover and repeat the process. It’s a lot of fun to call enemies for help, but they seem to act independently. Sometimes they go after the nearest enemy, but sometimes they just leave to do their thing. The best strategy seems to be to summon them as close to the target enemies as possible.

I’ll let you do all the work. 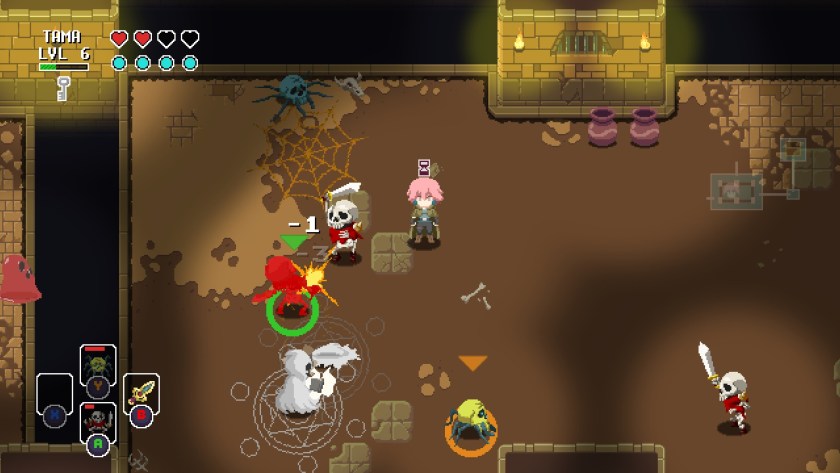 The graphics are presented in a nice pixel design with good animation. The levels lack variety though, you just seem to be exploring another stone dungeon with a different color scheme on each floor, making the area lack its own personality and style. I also saw a lot of repetition in the layout of the dungeon, meaning the design didn’t seem particularly random. Despite the diversity of the enemies, after a while it seems that only their color changed, not the enemy itself. It is clear that this method is often used to highlight the different features of the same sample. The skeleton can be based on ice (blue) or fire (red), but their patterns are trusted regardless of their properties.

I’m going to take a nap while you tell your story. 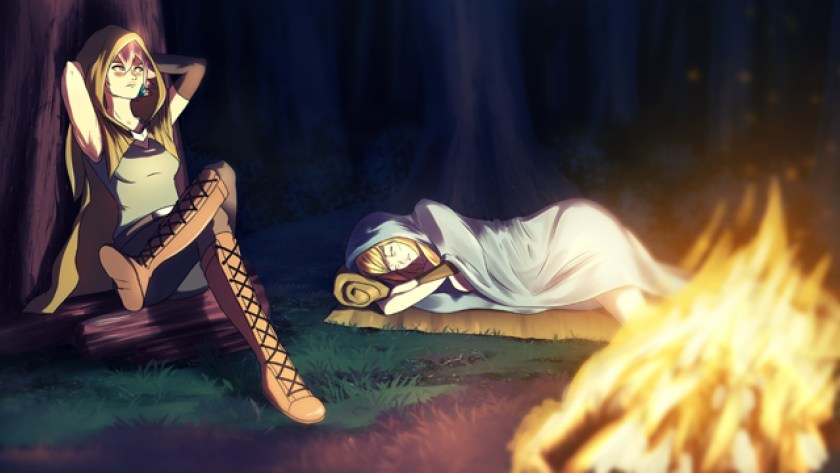 Like any roguelike, you’ll play the levels over and over again. This game did not captivate me as quickly as other games of its kind. When you die, certain experience points are transferred to the next floor. Basically, you get a little stronger each time, with more attack power, health and stamina the more you play. You lose everything you had before death, unless you managed to keep it in your coffin. The game offers different difficulty and accessibility settings, which will be greatly appreciated by players looking for a more relaxed experience. If you finish the game, there’s a little twist at the end that makes you want to play again, but I’m not going to give it here.

I tried this code, but unfortunately it didn’t work. 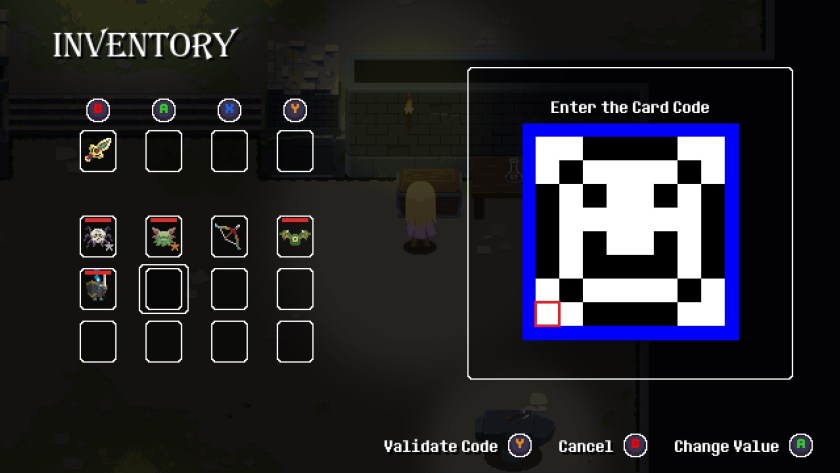 There is a local cooperative mode available in the game, in which another player can intervene at the beginning of a dungeon to help you in your quest. The game also includes an IR card system that allows you to scan codes to unlock items that you can use in future launches. This makes me think that the developers probably intend to support this game after it is released, so maybe give developers access to these maps for use in the game.

Overall, I enjoyed resurrecting fallen enemies to help me, and the score for this game is pretty good. Necromancer Sword has some interesting ideas, but it has yet to ally itself with the other titans of the genre. The combat is not very satisfying, and the game seems a little light on the items in the building I played.

It seems that there is still much to be done, although updates are possible in the future. Over time, it may become more than a good joke.

How do you load…