Skip to content
Nintendo is no stranger to remakes and remasters. They were probably one of the first companies to release a remaster in 1993 with the release of Super Mario All-Stars on the Super NES, which took the original NES games and updated them with improved 16-bit graphics and sound. Also in 1993, The Legend of Zelda was published: Link Awakening for the Game Boy. This would be Link’s first foray into the world of handheld computers, but certainly not his last. It was then remastered in color for the Game Boy Color, with some nice extras like a new dungeon.

Now, 26 years after its initial release, we are witnessing what Nintendo likes to call a reimagining with the release of Link’s Awakening for Nintendo Switch. Since I hadn’t beaten any of the previous playthroughs, I was determined to finish it, and I’m very glad I did! It’s become one of my favorite Zelda games to date, which isn’t easy. 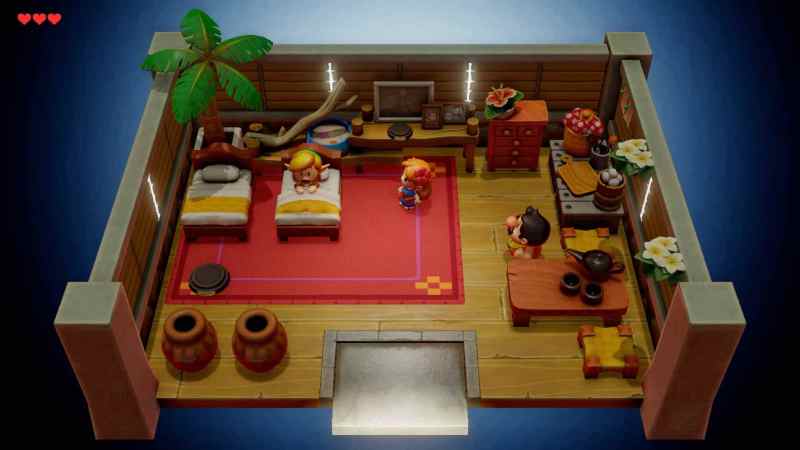 For the purposes of this review, I think it’s important to note my history with this game to put my opinions in perspective. I was barely a teenager when we got the NES in August 1988, and my love for Nintendo games really took off.

The following year I was lucky enough to receive a brand new Game Boy for Christmas. I played it a lot over the next two years, but a new console was on the cards. When the Super NES was released in August 1991, I had saved all my money by babysitting and mowing lawns to buy it at launch time. It was my most exciting system ever, and I couldn’t wait to finally play Super Mario World.

Even before the console’s release, game magazines like Electronic Gaming Monthly were showing screens of the new Zelda game. I spent hours sifting through every ounce of information I could find and looking at screenshots to get what was definitely unhealthy. So when Link to the Past was finally released in April 1992, I played it immediately. Needless to say, I almost completely stopped playing the NES and Game Boy because the Super NES was so much better. I may have been a graphics snob at the time, but if I had the choice, I’d still rather play 16-bit games than anything else. 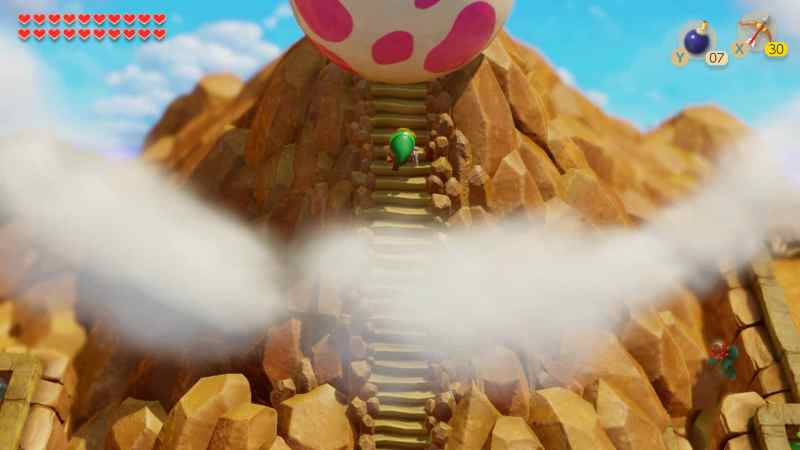 When Link’s Awakening was finally released for the Game Boy in 1993, I picked it up shortly after its release. I remember really enjoying it and having a good time with it, but what bothered me the most was the constant need to go in and out of the submenu to change equipment. Much of the game relied heavily on the shielding and the need to jump, which required an annoying amount of pauses, exchanges and then restarts. This, combined with the constant stream of new 16-bit games and the upcoming Sega CD (I was sure at the time that this would be the future of entertainment), meant that I didn’t get very far into the game. If I had to guess, I’d probably go through two dungeons in all. Fast forward to the release of Game Boy Color, and I was happy to spend the money to play the game in color again! I still have the same issues with swapping elements, and I probably played it in pretty much the same way as the original. Over time, I heard on various podcasts and websites that Link’s Awakening was a very special game to many people. Therefore, when Switch was announced, I knew this would finally be my chance to experience the entire game once and for all.

For me, Link’s Awakening on the Switch was practically a new game. It’s been so many years since I’ve spent so much time in this world that it all seemed so important to me. I remembered little things like Bow Wow, the Chain Chomp in the starting village, and a few NPCs, but other than that I started a whole new quest. As far as I know, this version of the game is almost identical to the previous versions. So if you know all the secrets and how to solve the puzzles, you might have doubts about spending $60 on what is essentially a nicer version of the game you already know so well. On the other hand, if it’s a game you love and cherish and is one of your favorites, then it may be worth the value proposition. 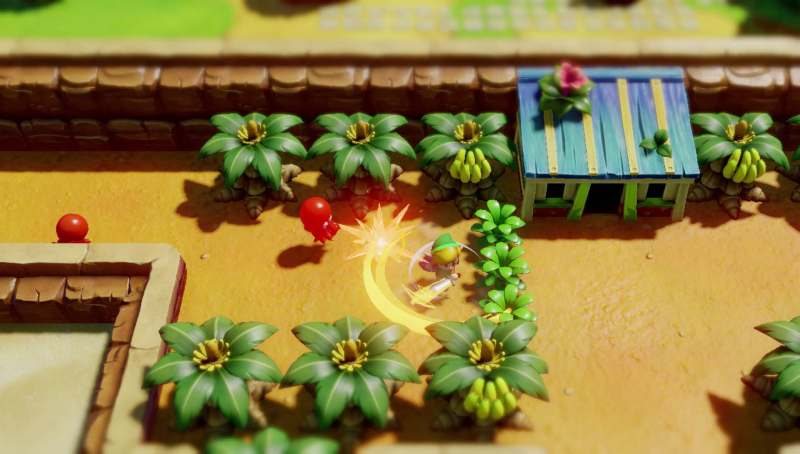 I highly recommend this game for new players, because although it originally looks like a Game Boy game, it is a full-fledged Zelda game. Somehow I kept thinking that maybe there wouldn’t be any dungeons, or that there would be fewer objects, or that it wouldn’t be over for another few hours. That was just the beginning of my experience with the Game Boy games of the time, like Super Mario Land, which only had four worlds, or Mega Man with only four bosses. Fortunately, there’s nothing to worry about, as the game is full of places to explore and secrets to discover. My play time ended up being about 15 hours, and I didn’t even collect all the hidden shells or Nintendo action figures. Suffice to say, there is a lot to do in this area.

With many more buttons at your disposal, this version of Link’s Awakening certainly plays a better role. The developers were able to match the shield with the R button and the running shoes with the L button. Swords are permanently assigned to key B, and keys Y and X can be assigned to any item in your inventory. I had the Roc pen on the Y button (to jump) and I replaced the X button with whatever I needed at the time, whether it was bombs, arrows or whatever. Simply using more buttons makes the game more accessible and gives it the modern quality of life it so desperately needs. 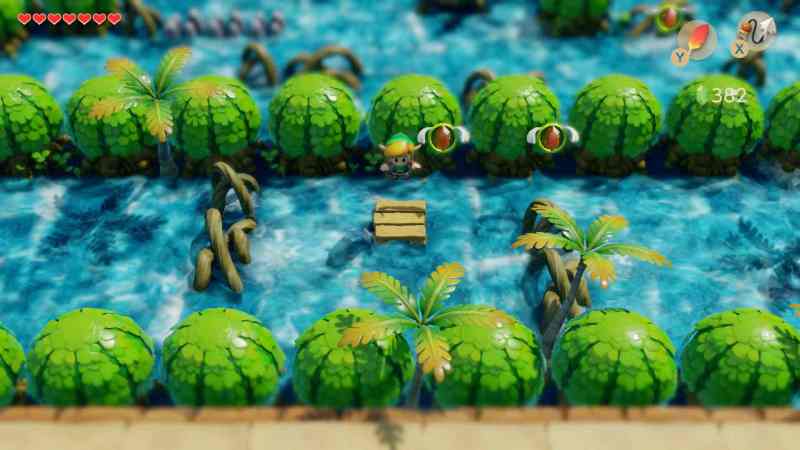 The biggest changes that will be immediately noticeable are improved graphics and music. When I saw the new art style, I was immediately hooked. The game still retains its top-down perspective, but things are very different from before. Pixelated elves are gone, but there are figurines that look like plastic figurines. The whole game, from the characters to the buildings and environments, looks like something ripped from a miniature toy game. The style of the animation reminds me a bit of the classic Rudolph the Red-Nosed Reindeer cartoon that used freeze frame technology. It’s not quite like that here, but the plastic trees and stone facades, which almost look like they were chiseled out of clay, certainly look the same.

Combined with the top view, it almost feels like you’re looking at a diorama or something in many scenes, and that’s a pretty great effect, especially in the dungeons. With the lighting effects and color saturation, it is truly an amazing achievement. This game is simply beautiful to look at, it’s so vibrant and colorful that it almost hurts at times. The water looks incredibly realistic, especially the small rivers and lake. Enemies live beautifully, and I love the different reactions when Link blocks a spear with his shield or bounces a rock off an octopus. The various locations seem to be handmade, and it never seems like someone copied and pasted a set of tiles to create an area. The amount of detail is impressive, and I absolutely love the decision to go in that direction. 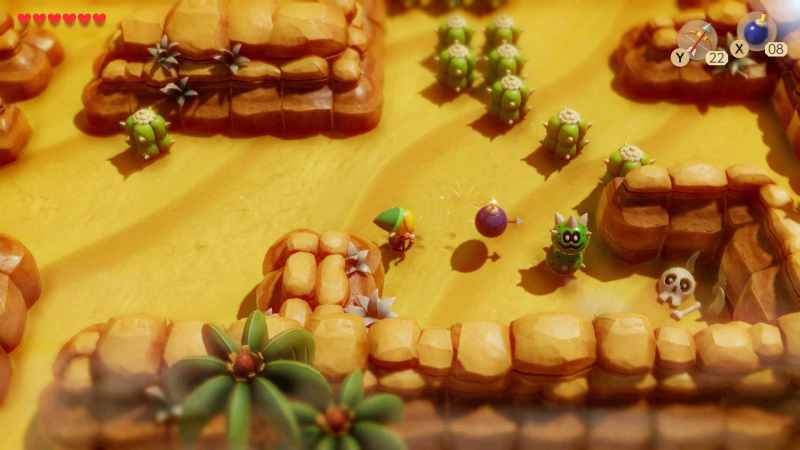 The soundtrack of this game is just as impressive. In this regard, I must congratulate the original piece, as I never realized how long the many musical numbers lasted. Zelda games before Link’s Awakening had one or two dungeon themes, but this game has eight different themes – one for each labyrinth. The composers took the original melodies and modernized them with orchestral samples that sound fantastic. In most cases, the chiptune is extended and significantly expanded to avoid repeating the song for about 30 seconds. In addition, some music pieces with original beeps and boops provide an extra dose of nostalgia. The sound effects are just as satisfying as the normal blades and thighs of your sword and shield. The jingle that plays when you discover a secret, such as the explosion of a piece of wall, is also very popular, as it is never boring!

The legend of Zelda: Link’s Awakening is a return to the essence of what makes a Zelda game a Zelda game. They have a ton of puzzles embedded in the other world, as well as the hells and mysteries that seem to be on every screen. For the first time, players will encounter real puzzles, and these puzzles are exponentially more fun to solve. You meet a variety of characters in the brief conversations, and as the game progressed and the story unfolded, I couldn’t help but feel a sense of sadness wash over me when I realized what the end of the story would likely entail. 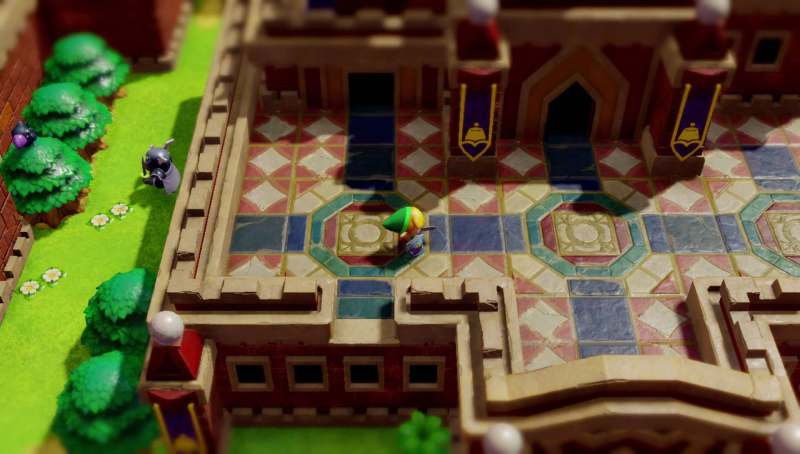 While the gameplay and locations are largely identical to the Game Boy version, there are a few differences. Apart from the increase in collectibles and the slightly different places of dialogue, the biggest change is the inclusion of the bedroom dungeon. You can find coins in the dungeons and place them in a similar Zelda minigame that lets you create your own maze. It’s pretty easy to learn, and I imagine some of them have a lot of fun creating their masterpieces. In a very Nintendo approach, you can’t share dungeons online, but instead you have to register them on an amiibo link and a friend can then tap their copy of the game and play your dungeon. I spent about 20 minutes in total in this mode, but I didn’t like it. Chances are, the mileage will vary.

Perhaps most impressive of all, this game proves that there’s plenty of room for different styles of Zelda play on the Switch. Link’s Awakening is a much more focused and linear experience than Breath of the Wild, but both manage to quench the same thirst for epic adventure. Slight stuttering issues and the gambling’s tendency to lead you down a one-way street where backtracking can be a little painful, don’t get in the way of a wonderful experience that shouldn’t be missed.

The Legend of Zelda: Awakening message

The legend of Zelda: Link’s Awakening is a fantastic experience from start to finish. With an incredibly charming artistic style and a great soundtrack of the most notable updates, the improved control scheme really makes this game more accessible than ever. Beginners can expect at least 15 hours of play (more if you want to collect everything), while veterans should have no problem moving through the game at a much faster pace. The price is in the eye of the beholder, but after looking at the credits, I felt the $60 price was more than fair.